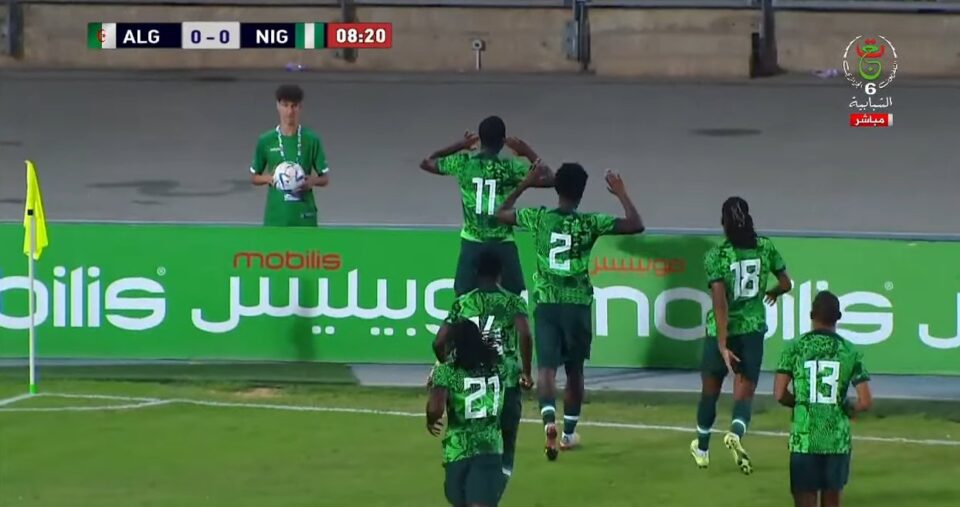 The senior national team of Algeria secured a comeback 2-1 win over Nigeria in an international friendly game played as part of the ceremony for the opening of the pitch at Oran.

Owngoalnigeria.com rates the players on parade for Nigeria in the game.

Francis Uzoho – He didn’t look commanding even before his error that decided the game in favor of Algeria. The only edge he probably has over Maduka Okoye is probably his ability with his legs….. 4/10

Ola Aina – Not news that he uses both feet very well and he now looks more assured in tackles. He was however not as commanding as he was in the previous games where he operated from the same position….. 5/10

Zaidu Sanusi – Has unbelievable energy to patrol the flank. The final ball was missing today and he was sloppy in possession unlike his usual self…… 5/10

Kevin Akpoguma – Solid on his return to the team. Showed very good understanding with Bassey even though they were playing together for the first time. He was unbeatable in aerial duels, solid in making blocks and also brought the ball out from the back with ease. Nice way to mark his return to the tea……. 6.5/10

Calvin Bassey – Started and ended the game with the same authority that is slowly becoming his trademark. Won all that was thrown at him. Worked nicely in tandem with Akpoguma. Unfortunate to be on the losing side…….7/10

Frank Onyeka – His energy level is unmatched but still needs to work on using the ball especially when he is under pressure. His clumsy tackle handed Algeria the spot kick which helped them to draw level…….. 5/10

Alex Iwobi – If there is any player who was very comfortable even when under pressure then it has to be Iwobi. Held the ball nicely and brought others into play effortlessly. Still need a partner to help make the team’s woes in the midfield a thing of the past……. 7.5/10

Moses Simon – Solid but not spectacular. Defended very well when under pressure and it probably played a role in why he wasn’t that influential in attack. Not one of his best displays in Nigeria’s shirt…… 6/10

Kelechi Iheanacho – Thrice had the chance to play in a better placed teammate with a simple pass but decided to go for glory. Wasteful in possession and didn’t quite understand his role hence couldn’t interpret it as expected……..5/10

Terem Moffi- Showed great awareness to score the goal. Wonderful first touch means his hold up play was on another level. Troubled Algeria for the time he was on the pitch……..6/10

Ademola Lookman – Lively in the first half, anonymous and wasteful in the second half. No surprises when he was subbed off. He has to step up his game if he wants to keep his spot in the team………. 4/10

Barcelona not a place for you, Mathieu tells Griezmann